Metropolitan Athanasios:
I told you, for our memorable Elder Joseph, Holy Communion was an unspeakable thing.
In our hermitage we served the Divine Liturgy on a daily basis. As it is the case in all our monastic life.
Fathers received communion four times a week: Tuesday, Thursday, Saturday and Sunday. The Elder received communion, of course, like us.
I was for many years the only priest of the brotherhood because the other fathers were newer. I was the “oldest” counting the number of years I spent in the monastery. There were also fathers older then me, but I had more years in the monastery, and I was a priest.

So I offered communion to the Elder who was a simple monk. For so many years, countless times, he received communion from my hand; I offered it to him!
You know… not even a single time, not even once, with all certainty, he communed without tears!
And not a few drops of false tears which we sometimes have too! We also have enough tears, but for other reasons! But for the Holy Communion…
Tears, no joke! Cries, sobs, sobs… So many times he came to commune, and he was not a child, for you to say, “Well, he’s a baby!” Or a little girl who becomes easily emotional!
He was a man, a big man! And a tough man! Man of Labor! From Paphos, Akamas Peninsula! He took stones and turned them into dust! Man of Labor! Tough man!
But before communion, he was overwhelmed, what shall I tell you?
He often came ready to commune, and I used to wait a little for him to stop crying. Not only tears, but sobs! I was waiting for him to stop, so I could offer him Holy Communion. What can I tell you? He was all wet!
I was thinking, “Well, why couldn’t he at least once commune like everyone else?” Without tears, we were like pushed from behind… May God forgive us, but… we were so rigid, so… like stones… What shall we do? We are stones… But even the stones have hope… We also have hope. Something will happen here with us! Sometimes stones are useful!

But does he have a button he pushes so all these tears come out?
What was his “button”? The great self-condemnation he had! He practiced self-condemnation!
What does “self-condemnation” mean? Humility, repentance, the fact that he was blaming himself. And indeed, he spent all his life in tears!
Those tears were not like tears that kill, but they were tears that filled him with joy! He was full of joy! Full of joy! 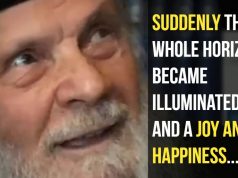 How I met the devil (Fr. Cleopa)

The vision of Father Ephraim of Arizona (Metr. Athanasios)

”I became a wanderer for the love of Christ” (St. Porphyrios)

”Did you forget that Christ is Risen?” (Metr. George Khodr)

The purpose of Jesus Prayer 3/3 (Fr. Aimilianos of Mount Athos)

How should we fast? (Fr. Iustin Parvu)