Fr. Dumitru Staniloae talks about the concept of personhood in Eastern Christianity, where it has a central significance. Salvation is a very concrete action, always related to a person, as opposed to a philosophical understanding of the salvation of the essence of humanity.

“All philosophers want to reduce the entire existence to some essences whose laws they can find easily, and then they say they know everything.
They did not know the idea of the person.
Salvation is for the person, not for the essence.
Why should I be interested in the salvation of the essence of humanity? I am interested in my salvation, salvation of my father, of my child, of my friend… as persons… The essence is only in persons.
Christianity brought the idea of personhood and, through it, the idea of salvation. The West did not understand this…
There, Christianity went into a world that emerged from barbarism. A Reformed theologian said: “In our case, Christianity entered a world that emerged from barbarism and taught us not to kill and not to steal… ”
While in Orient, it went into a very refined world, where they saw that all their previous philosophies and cultures did not satisfy them because the value of the person, the value of each human being as person, had not been discovered then.
We had these things in the East, and therefore, in our case, even in our country, who preserved the original Christianity, the ancient Christianity… We see God everywhere!” 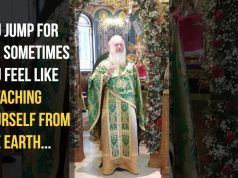